The Juan Matias Sanchez Adobe remains the oldest structure in Montebello, dating back to 1845, second only to the original San Gabriel Mission (c. 1771) which once stood in and around the intersection of Lincoln Ave. and San Gabriel Blvd. The Adobe nestled in the hills of North Montebello, within a quiet residential neighborhood, remains a hidden jewel in Montebello history. 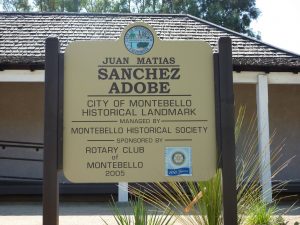 Originally part of a Mexican land grant, the Rancho La Merced “Mercy of God,” the Sanchez Adobe occupies what was once 2,363 acres of fertile ranch land. Originally given to Casilda Soto de Lobo in 1844, Rancho La Merced was purchased by William Workman in 1851, who eventually gave his son-in-law Francisco Temple and Juan Matias Sanchez ownership. In 1851 Juan Matias Sanchez took up residence at the adobe, remaining there until his death in 1885. Sanchez’s family resided at the property until 1911. In 1915, W.B. Scott purchased the Adobe and 45 acres of land. Following Scott’s death, the property was passed on to Scott’s wife Luna and subsequently to their children, Josephine Crocker and William Keith Scott. In 1972, the Scott family gave the Adobe to the city of Montebello where it remains as a local historical landmark. The Adobe Museum is an important and vital part of Montebello history and is rich in resources

The Museum contains belongings from the Sanchez family, artifacts from the 19th century as well as collections from the 20th century containing local memorabilia ranging from education to sports and architecture and many relevant displays of local interest. Newly refurbished, the Museum is expansive and reflective of the diversity of this vibrant community with the 20th century Montebello room.